I’ve had this amplifier for more than 2 months now, and I was eager to write the review on it, so now it is time to unleash it on the internet.

All begun more than 8 months ago when a good friend of mine bought this amplifier. From that moment on, he was only taboo this…taboo that… with him. He was really fascinated with this amplifier. I knew that there must be something really good about it as I trusted his experience and tastes.

After a few months he decided to go full Stax, and I saw an opportunity to buy it from him, so here we are. I was really excited to hear it and have it on my desk after all the teasing he put me through during the last few months. This is my first tube amplifier and I thought it was time to get into this sector as I was really curious.

Well I must say that it is everything he said and praised. However, I have recently chosen LCD-X over LCD-3, and LCD-X is a lot more efficient than the flagship. This amp seems to be designed for power hungry headphones, especially  for Audeze LCD-2 & LCD-3.

With LCD-X, I experienced a low level hum on the left channel, something that many people would probably ignore, but a maniac like me could get frustrated by.

I am still trying to fix that with the adding of a new resistance on the output as Steve from Decware suggested. The first resistor seemed to make the hum quieter, but for now I didn’t manage to fix it completely.

Letting the hum aside this amplifier is wonderful and has a magical sound presentation.

Taboo has 3 different looks you can chose from :

I have the third version as I found it to be the best looking from the three. Even though I like the design very much, I have found some friends that made fun of it’s looks and other friends that liked it as much as I do. So, I think it is a love/hate situation. I am in the love section and I must say that I appreciate the looks and design of the unit.

You can find more about the unit here.

The Taboo is a single-ended pentode amplifier using the amazingly fast 9 pin output tubes from Russian Radar Video Display called the 6P15P-EV.  They have Gold Grids, plated pins, extra thick glass, and extra long life.  These tubes are incredibly neutral and extended giving you layers of micro-detail not often heard in bigger tubes… and their affordable.

This is the power output based on the headphone’s impedance:

The build quality is quite nice.It also has good finish and feels sturdy.

We’re certain nothing else can compare because we have developed one of the world‘s most esoterically simple yet powerfully natural cross-feed circuits for the Taboo called “LUCID MODE”.  This switchable feature is fundamental to the Taboo design dating back to it’s debut in 2004.  Our new Taboo MKIII has two switchable “LUCID MODES” that take things to a new level that you have to hear to believe.

The “Old” Lucid Mode is a little softer compared to the new lucid mode, as it affects the sound in a smaller amount. I found  both to bring the upper midrange and the treble in front and to expand the soundstage. The old lucid mode can have a wider use as it is less aggressive and can be used on larger variety of songs. However, the new Lucid Mode can be very interesting too on some very good recordings, especially with classical music.

Decware also makes it easy for us to change tubes, as Taboo is a self biasing amplifier:

The amplifier is self biasing so you NEVER have to set or adjust the bias for the output tubes.  If you’ve ever owned an amplifier that you had to bias all the time you’ll completely appreciate this design. The meters show you the condition of your output tubes and how well they match.

It is also easy to see if your tubes match, because it also has Bias Meters:

BIAS METERS – Supplied for each output tube, the meters show how many milliampseach output tube draws.  A great indicator of the condition of the tubes and how well they match.

They also say that the amplifier has ultra low noise and shouldn’t have any hum. Unfortunately, it does with efficient headphones. However, this issue doesn’t exist with the last release.

ULTRA LOW NOISE – Less than 1 mv of noise and hum (usually 0.4mv). The benefit is ultra black backgrounds and inaudible hum on even the most efficient ear speakers.

Taboo is a balanced amplifier and I found it to excel on both balanced and single ended outputs.

You just know your gear  is good when you feel the need to close your eyes and just listen to the music, get lost into it, feel every instrument, note and play with it inside your head. This is exactly what happened with taboo on this song. Felt every pluck, played along with the guitars, jumped from layer to layer with ease and “left” the song with an airy and playful state.

ABBA – I have a dream

The first thing I felt was a better sense of space, as the sound seemed to be uncompressed. Everything was just flowing with ease and musicality. The guitars were sparkly, with very good extensions and space between them, the voices were more natural and had more body and presence.

The presentation was just incredible. The sound was  crystal clear and extended. The soundstage was huge, adding another sense of depth that I never knew LCD-X was capable of. The bass was very smooth and clean with good impact, body and extension. Hugh’s voice was clean and had a natural tonality. The extensions of the instruments were at another level, as they had a fuller life.

Ok, I forgot I was writing the review while listening, as I got completely lost into the song. Taboo gave an incredibly transparent presentation with crystal clear sound, excellent instrument separation, layering, deep and clean bass and natural voices. The guitars were incredible, with excellent pluck attack and full body.

The Eagles – New Kid in Town

I keep getting lost into the music. The song gave me a feeling of effortless playing as everything came natural and just as it should be. The drums were excellent with very good impact, depth and clean as a whistle. The layering and soundstage is again incredible. Wait…what was I talking about..? Ah…ok…review..keep forgetting what I am doing with wonderful piece of gear.

Leonard Cohen – You know who I am

The fascinated journey into music continues as Taboo is just opening a clean window into the music. Never heard such transparency . Leonard’s voice was excellent, clean as a whistle, natural & wonderfully textured. The guitar was telling it’s own great story on a totally different layer with excellent extension and attack.

This amplifier never seizes to amaze me. The sound is incredibly natural and organic, but still fast and engaging. The soundstage is again incredible as the scene has an amazing width and depth and the layers have a lot of air between them. The instruments have a very good attack and lively extension without being lazy.

Beethoven – Bagatelle in A minor

This song managed to bring up some wonderful memories from my childhood with Taboo as in the fith grade, we had this song as a call bell at school. The opening of the scene is just amazing. The piano notes are incredibly clean and have a natural tone. It’s been some time since  a song brought tears to my eyes, but this piece with taboo managed to do it with ease.

The bass on taboo is incredible as it is crystal clear, with excellent depth, body and punch. It’s not as controlled or fast as with Burson Conductor, but it is very fast for a tube amp and balanced, as it doesn’t invade into other frequencies.

The midrange is excellent as the instruments have a life of their own, a full life that is, as they have an excellent extension and presence. The voices are very natural, with an excellently pleasant tonality and texture.

Taboo is a clean window to the music. I never heard such transparency in a headphone amplifier. I just get lost into my music with it.

The attack on taboo is very good as it has exploding power. The decays are quite fast for a tube amplifier, giving an energetic presentation. Between the attack and decay, the sound has a full life as the instruments have excellent extension.

Because of the wonderful instrument extension, taboo reveals some very interesting and nice details into the song.

Taboo is just amazing in this department. I found some qualities in LCD-X that I never knew were there. I found a new level of depth and width into the sound. The layers of the instruments and voices expanded by a large margin, like the sound uncompressed from a smaller room into a full blown concert hall.

I found that Taboo has excellent dynamics and every instrument had it’s own life in the scene, being able to tell it’s own story.

Despide the fact it is a tube amplifier, taboo manages to have a neutral presentation.

Taboo is one of those products that I will never forget in my journey. It really made me get deeper into my music and get emotionally involved. I just wanted to close my eyes and listen to the music, play with every note in my head, take a ride on every note like an emotional roller coaster, then get out of the cart with a playful and energetic state.

Even if I have the low level hum on the left channel with LCD-X due to it’s good efficiency, I still managed to love this amplifier and I think that this is the best amplifier I have ever tested until now.

However, If you are sensitive like I am, and have a sensitive headphone, that hum can be very annoying sometimes, especially at night when the environment is quiet, combined with pauses in music or silent passages.

But don’t worry. From what I understand, the last release won’t have this problem, as you can chose to have a low gain output, besides the high gain one, and I advise you to do so.

I hope I get rid of it, so let’s see the quality of Decware support and how they act on this.

Considering it is a tube amplifier, I expected a slower, warmer tonality, but Taboo managed to impress me with a neutral, transparent, energetic and fast sound presentation.

So Taboo is not your basic tube amplifier as it brings a lot of good stuff from the solid states!

Compared to Burson Conductor, it has  a larger soundstage, better instrument extension, deeper & cleaner bass, more natural tonality & better transparency. While, I ended preferring Taboo to Conductor, the Burson still has some good points as it is overall faster, with better control and more details on the treble and slightly on the upper midrange  ( however, taboo sounds more natural ). One other good thing about Conductor is that it is very versatile as it was good with almost every headphone I have given it, from in ears like IE800, to full blown headphones like Sennheiser HD800, Audezes, etc, and it is dead silent with all headphones.

I found it to be a good match with HD800 too, and even on single ended as I didn’t have a balanced cable for it when I ran the tests. Will come back with more details about how HD800 is on balanced outputs.

Taboo doesn’t have a gain selector at the moment and on more sensitive headphones it may present a low level hum. However, Steve said that the future units may have this new feature. 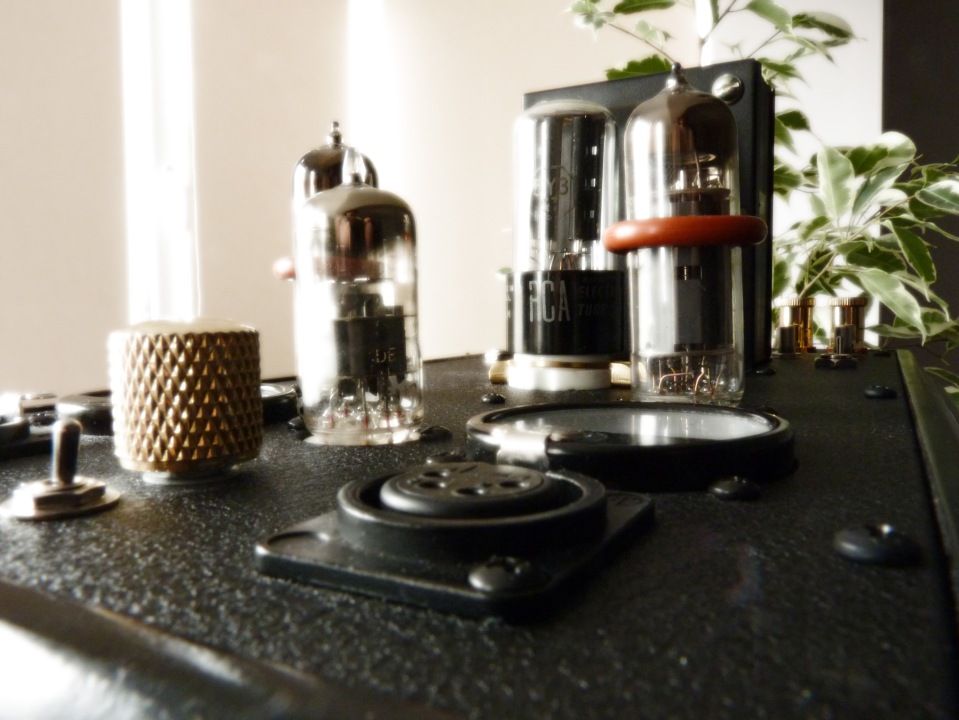