Hearing that Moon has recently released a new DAC upgrade for some of it’s products, I was really curious to see how they perform. I managed to borrow a Neo 380D DSD from Jack-Fi and here we are.

Don’t be scared by the following picture. I know this is an old case of 380D, but it was fully upgraded to Neo DSD 380D inside. Seeing the new case as well, I must say that I like the latest quite a lot more than the old one as it has a more appealing design and thicker materials.

And now let’s see how the new enclosure looks like:

The higher end moon products always impressed me with their build quality. They are so sturdy and seem so well build that they give me the impressions that they wanted them to last a nuclear war or something.

When I said that Moon upgraded their products, it was somewhat of an understatement as they kind of changed the whole dac board.

You can find all about the product here.

Let’s go through some features that caught my eyes: 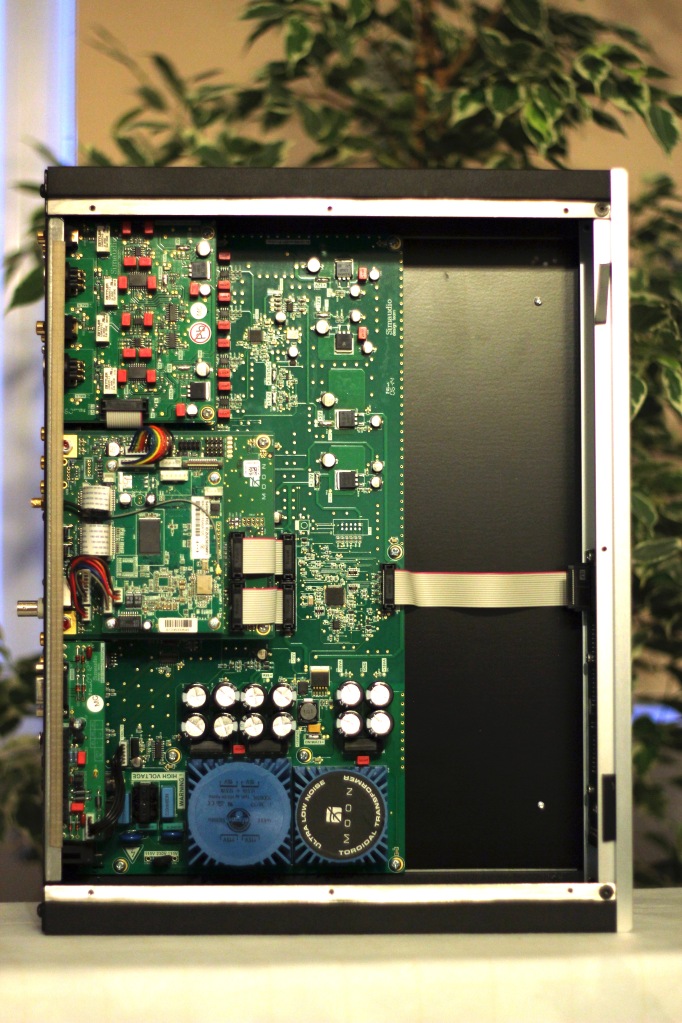 And yes, it does have all the outputs/inputs you would ever need.

The Digital/Analog power supply transformers have 25VA / 10 VA and the power supply capacitance is 26400 µF .

I’ve tried to use the Neo 380D DSD with my regenerator and something seemed a little off. It wasn’t a good match and it sounded better directly from the wall socket. With the regenerator I lost bass depth, energy and musicality. This is good news as you don’t need to buy anything else with it.

Using my Forza Split USB cable, I took out the 5V and saw that the Moon driver disappeared from playback devices. Ok, so the usb input uses the 5v. No problem, as I was ready for that and I applied the same tweak I described here, meaning that I used a forza split usb cable that takes only the signal from the pc and the 5V from a linear power supply. The sound improved in the same way I described in the article above.

After listening to some songs, I realized this DAC is something special. Hang in for a fun ride.

I have also tested it with my Focal Aria 906 bookshelves powered by the Audio GD Precision 2. I felt like the Neo 380D DSD was an awesome match with them. The mids on 906 became even more lively and enjoyable. Everything sounded extremely and euphonical and musical with great energy and in a lively fashion. Actually I felt like I lost less speed, attack and transparency compared to MSB Analog Dac, than it did on the headphone system. This may also be because the 906 can’t scale as much as HD800.

Wow, this is a good one. The first guitar plucks drew my attention, as they had something really  special. Then the female voice came in and I did not expect this level of naturalness from a delta sigma dac, especially from a Sabre implementation.  Both voices had a warm and pleasant tonality with good presence and detail. I was in the front row with the artists, between the instruments. Ah…but the instruments and especially the guitars were magic. Can’t explain what they have yet, but they have something really special and euphonic.

The first thing I noticed was that the plucks weren’t so powerful and full sounded as Analog Dac. The guitar’s enclosure could be felt better with analog dac, giving a better idea of its size when used as drums. However, the extension of the guitars had something special again, something added that made the sound more pleasant. I think I got it, it’s like having some harmonics attached to it, giving a very interesting touch to the sound, making the mids incredibly euphonic, similar to the harmonics found in tube amplifiers.

The sound just flows and flows continuously taking you with it in its musical stream. The voice is present, very pleasant and analogically textured while the instruments play with ease around it. The drums have a very interesting punch. It’s not a very strong one, but not weak either, but it is integrated very well with it’s decay and with all the other instruments and vocals, giving a very nice and musical flow to the listening experience.

Wanted to see how some electrical guitars sound with these mids and my expectations were not disappointed in this area as the guitars were very pleasant here too. However, this song could have used more speed and impact, which Analog Dac is more capable of.

The female voices from the beginning astonished me, leaving me stunned and completely drawing me into the song. They had an incredibly natural and pleasant tonality and texture. It was like someone was singing in my ears, this giving me goosebumps. Leonard’s voice was very nice as well, with a detailed texture that showed the pleasant ruggedness of his voice.

The harmonics that I was talking about were present here too, making this song very enjoyable. Not only that all the instruments had a very euphonic extension, giving them an unique sound signature, but it also had a very good soundstage, instrument separation and details.

The bass is quite good. Not MSB Analog Dac, good but very good and very well integrated with the rest of the frequencies.

The mids are the stars of this show. This DAC has something really special here and it was unique in this department. While keeping good detail, I felt like the mids had some secondary harmonics that made the sound very euphonic and pleasant. This might be one of the most musical DACs I have ever listened to in my life.

The treble is very well extended and detailed. It might be the best treble I’ve heard from a sabre implementation and very good for delta sigma dacs in general, but still not as natural as on Analog Dac.

The voices are very natural, pleasant and well textured and sometimes give you a very nice feeling of intimacy.

This is a key point to the euphonic sound signature. Simaudio managed to achieve a very interesting balance here. The attack is not so strong but not too weak either and it integrates perfectly with the decay which works on the same philosophy the attack has, as it’s not so fast, but not so slow either. This gives a very flowing and musical listening experience.

While not the most detailed dac I’ve heard and not in the same league with Analog Dac, it still has very good details and on some fronts the details do excel. Let’s take for example the guitar plucks or any percussion instrument for that matter. The plucks have a very interesting extension with some harmonics attached to it, giving a very tickling sensation to your ears to the point you may get goose bumps.

Considering the euphonic sound signature, this is a another interesting aspect of this DAC, as it offers good transparency as well. It’s not it’s first feature you notice, and it’s not the best here, but it’s enough to keep the eufonic signature and still offer clean & transparent sound.

This DAC was extremely fun and pleasant to review. I’ve missed a product like this, a product to impress me so strong. Simaudio managed to achieve a very hard and interesting balance between some very important factors in sound, giving a very musical sound signature but still keeping some key factors like details, transparency, soundstage, etc.

The mids on this DAC are just amazing. All the instruments and voices are very euphonic, especially the percussion instruments. They really manage to tickle your ears to the point that you get goosebumps. While this is very cool, it can get a little tiresome after a while. How, you ask? Well, imagine you like pancakes very much ( I certainly do ). Imagine that you can have them anytime you want and with as much chocolate you want. Eventually, you will get a little tired of them even though they are absolutely awesome. As in that example, the sweet and euphonic mids might overload you after a while.

These being said, I found this DAC to be really special and one of the most musical DACs I have ever heard.

Actually, I think it is one of the best DACs I have ever tested, and wins a place on my recommendation list right after Analog Dac and Wavedream.